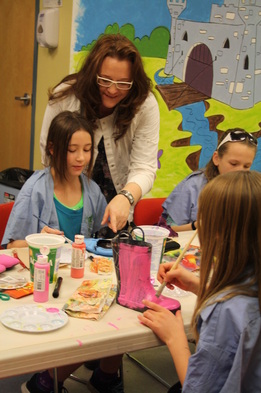 Rhea (pronounced Raya) Dallaire is a mixed media artist who loves to push the boundaries of color utilizing a variety media, in hopes of awakening the human spirit.  Rhea’s passion for the arts merged as a child.  Fascinated by the kaleidoscope of color, light and shadows in nature, or a box of Crayola crayons, she began her journey as an artist.  She believes her gift is God breathed.

Working in the world of mixed media allows her to incorporate reclaimed and three dimensional items in a myriad of ways either by using acrylic media or the ancient Egyptian form of encaustic which involves combining heated beeswax and colored pigment.

Working mainly on whimsical, and abstract pieces, these have opened doors to paint live for Kings, Mayors, and numerous conferences as guest artist live on stage.   In 2008, after the terrible
circumstances that friends in Africa experienced, she organized a fundraising art auction to build a greatly needed orphanage. Both she and her work have been described as a ray of sunshine, bringing hope to those less fortunate.

Rhea is also well-known for the altered shoes she creates.  Adding layers of color and adhering items to create items that may no longer have a use in society but, in her hands, become beautiful works of art. Her work can be found in the private collections of African Kings, Arctic Mayors, and throughout the United States, Europe, Canada, Africa,Mexico and several other nations.

Note:  All Images are protected by copyright